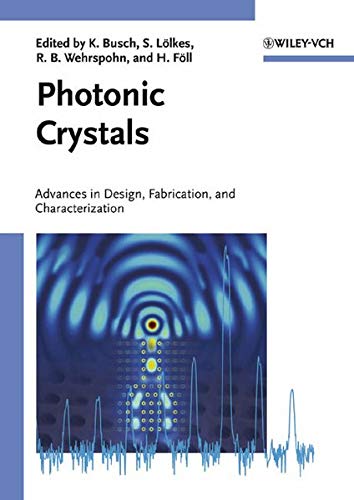 The majority of the contributions in this topically edited book stems from the priority program SPP 1113 "Photonische Kristalle" run by the Deutsche Forschungsgemeinschaft (DFG), resulting in a survey of the current state of photonic crystal research in Germany. The first part of the book describes methods for the theoretical analysis of their optical properties as well as the results. The main part is dedicated to the fabrication, characterization and modeling of two- and three-dimensional photonic crystals, while the final section presents a wide spectrum of applications: gas sensors, micro-lasers, and photonic crystal fibers.
Illustrated in full color, this book is not only of interest to advanced students and researchers in physics, electrical engineering, and material science, but also to company R&D departments involved in photonic crystal-related technological developments.

Photonik - Fachzeitschrift für die Optischen Technologien Juni 2004
"Photonic Crystals, edited by Kurt Busch, Stefan Lölkes, Ralf B. Wehrspohn and Helmut Föll, collects together excellent contributions from a number of experts - mainly from Germany - in the field of photonic bandgap structures. The book, with a foreword by S. John, reviews the state-of-the-art in the field with great emphasis on the achievements of the German scientific community."

Stefan Lölkes graduated in semiconductor physics at the Technical University of Munich, Germany, in 2000. In 2001, he started his Ph.D. thesis on “Electrochemical etching of Photonic Crystals” at the Chair for General Materials Science at the Chr istian-Alb rechts-University of Kiel, Germany. In parallel, he co-organized already several national symposia on Photonic Crystals in the framework of the DFG priority program 1113 “Photonic Crystals”.

Ralf B. Wehrspohn received his diploma degree in physics at the University of Oldenburg in 1995. He then carried out a Ph.D. at the Ecole Polytechnique in France about thin film technology and electrochemistry. In 1998 he joined the Philips Research Laboratories in Redhill, U.K., to work on thin film transistors for AMLCD. From end of 1999 to March 2003 he has been responsible for the activities on photonic crystals and self-ordered porous materials at the Max-Planck-Institute of Microstructure Physics in Halle. Since April 2003 he is full professor in experimental physics at the University of Paderborn where he leads the activities on nanophotonic materials. R. B. Wehrspohn has been awarded with the Heinz Maier-Leipnitz award of the DFG and the TR100 innovation price of the MIT in 2003.

Helmut Föll received his Ph.D. degree in Physics in 1976 from the University of Stuttgart in conjunction with the Max-Planck-Institute for Metal Research in Stuttgart. After postdoctorial work at the Department of Materials Science and Engineering at Cornell University and a position as guest scientist at the T.J. Watson Res. Center of IBM in Yorktown Heights, he joined Siemens in 1980, working in the newly founded Solar Energy Department of Central Research in Munich. After various senior positions in microelectronics development, in 1991 he accepted an offer of the Christian-Albrechts-University of Kiel to become the founding dean of the newly established Faculty of Engineering, where he also holds the Chair for General Materials Science. Since 1998 he is back to research, with particular interest in solar cell technology and the electrochemistry of semiconductors. He is one of the pioneers in the field of porous semiconductors and has coauthored more than 150 papers and 20 patents.