Articoli correlati a Diffusion Processes and Their Sample Paths.

Diffusion Processes and Their Sample Paths. 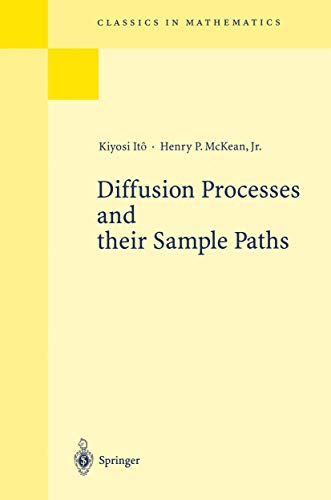 Since its first publication in 1965 in the series "Grundlehren der mathematischen Wissenschaften" this book has had a profound and enduring influence on research into the stochastic processes associated with diffusion phenomena. Generations of mathematicians have appreciated the clarity of the descriptions given of one- or more- dimensional diffusion processes and the mathematical insight provided into Brownian motion. Now, with its republication in the "Classics in Mathematics" it is hoped that a new generation will be able to enjoy the classic text of ItA and McKean.""

"The systematic character of the exposision, which makes from the widely ramified subject matter of the extensive literature a clear, masterly arranged whole, is a particularly valuable feature of this monograph." (Publicationes Mathematicae)

Kiyosi Itô was born on September 7, 1915, in Kuwana, Japan. After his undergraduate and doctoral studies at Tokyo University, he was associate professor at Nagoya University before joining the faculty of Kyoto University in 1952. He has remained there ever since and is now Professor Emeritus, but has also spent several years at each of Stanford, Aarhus and Cornell Universities and the University of Minnesota.

Itô's fundamental contributions to probability theory, especially the creation of stochastic differential and integral calculus and of excursion theory, form a cornerstone of this field. They have led to a profound understanding of the infinitesimal development of Markovian sample paths, and also of applied problems and phenomena associated with the planning, control and optimization of engineering and other random systems.
Professor Itô has been the inspirer and teacher of an entire generation of Japanese probabilists.

Henry McKean was born on December 14, 1930, in Wenham, Massachusetts. He studied mathematics at Dartmouth College, Cambridge University, and Princeton University; he received his degree from the last in 1955. He has held professional positions at Kyoto University, MIT, Rockefeller University, Weizmann Institute, Balliol College, Oxford, and the Courant Institute of Mathematical Sciences (1969 to present).  His main interests are probability, Hamiltonian mechanics, complex function theory, and nonlinear partial differential equations.

1. Diffusion Processes and their Sample Paths

Descrizione libro Springer 1996-01-05, 1996. Hardcover. Condizione: Very Good. Item is in very good condition. If supplemental codes/CDs for textbooks are required please contact us prior to purchasing as they may be missing. Photos are stock pictures and not of the actual item. Codice articolo DS-3540033025-2

Descrizione libro Springer 1974-01-01, 1974. Hardcover. Condizione: Poor. extremities to the book with marks and knocks and a inscription to the intro page but does notaffect the content. Hardcover. Codice articolo 132808-1