Articoli correlati a Molecular and Cellular Mechanisms in Disease: 1: Bioenergeti... 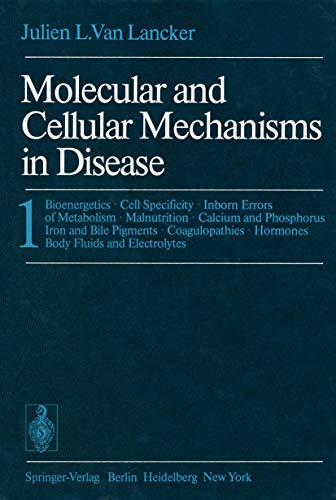 In spite of ingenious experiments, imaginative theories, and unshakable faith in supreme forces, there is no way to know how life began. What is certain is that in the course of the development of the universe existing sources of energy fused to generate atoms, and atoms mingled to become small molecules. At some point by chance or design-according to one's belief, but no one's evidence-small molecules such as hydrogen, oxygen, carbon dioxide, water, and ammonia reacted to yield larger molecules with the property most essential to life: self-replication. Such molecules had to achieve a proper balance between the stability needed for their survival in the environment and the mutability for the generation of many forms of life. How amino acids were created or how DNA, RNA, and proteins developed remains a mystery. But we know that a simple core of nucleic acid embedded in a protein coat made the simplest unit of life (except for viroids). Whether viruses are a primitive or degenerated form of life is not known. Once proteins appeared, their great structural plasticity allowed them to react with other elements such as sulfur, iron, copper, and zinc. After an incalculable number of years, some of the proteins became capable of catalyzing the synthesis of new nucleic acids, new proteins, and other compounds such as polysaccharides and lipids.