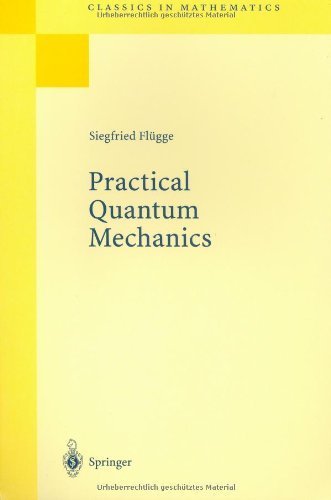 This paperback edition, originally published as a two-volume set in Grundlehren der Mathematischen Wissenschaften has made this classical compendium of quantitative methods in quantum mechanics more accessible to students. In addition to problems of classical and relativistic quantum mechanics, this volume contains methods of approximation, problems in radiation theory & scattering theory. Choice stated that the original edition: "..probably represents the best collection of detailed solution for problems in quantum mechanics. The style, readibility, and quality of presentation are excellent; the level is appropriate for an advanced under- graduate or graduate course in quantum mechanics. These volumes will be a valuable reference for faculty and students and will serve as an excellent supplementary text."

From the reviews: "Anyone who has taught a course of quantum mechanics knows the difficulty of providing practical examples which are within the mathematical competence of the students and can be completed in a reasonable time. In this book will be found 219 problems, together with their solutions, which will greatly extend the repertoire. (...) The first volume deals exclusively with one-body problems without spin. (...) In the second volume the problems cover a wider range and include illustrations of the introduction of spin, the interactions between two and three particles, quantum statistics and the Dirac relativistic equation with shorter sections on non-stationary problems and radiation theory. (...)" Nature, Sept. 10, 1971.  "The student who can master these problems will have a good grasp of the practical applications of quantum theory and, therefore, of the basic concepts as well. I recommend the book unreservedly." The Australian Physicist, May 1972.

Siegfried Flügge was born on March 16, 1912 in Dresden. He studied physics in Dresden, Frankfurt, and Göttingen, where he completed his doctorate in 1933 under the supervision of Max Born. After holding positions at the universities of Frankfurt and Leipzig, he worked in Berlin as a theorist-in-residence with Otto Hahn and Lise Meitner. Here he witnessed the historical moment of nuclear fission and took an active part in its interpretation.

In 1944 Flügge became professor in Königsberg. He taught in Göttingen from 1945 to 1947 when he accepted a chair in theoretical physics in Marburg. Finally, in 1961, he followed a call to Freiburg where he taught until his retirement in 1977. He died in December 1997.

Flügge worked primarily in theoretical nuclear physics, but he also published widely in quantum physics, astrophysics, and other areas. His numerous textbooks served as standard references to generations of students. He also single-handedly edited the monumental Encyclopedia of Physics.