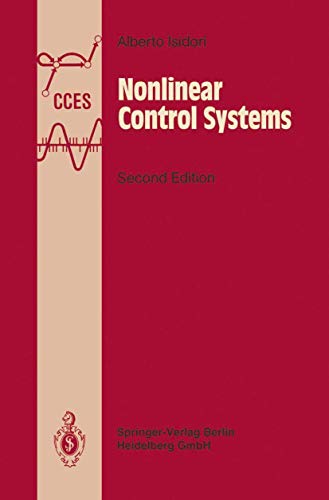 This book introduces nonlinear control systems at a level suitable for graduate students and researchers. Chapter 1 introduces invariant distributions, a fundamental tool in the analysis of the internal structure of nonlinear systems. It is shown that a nonlinear system locally exhibits decompositions into parts similar to those introduced by Kalman for linear systems. Chapter 2 explains to what extent global decompositions may exist, corresponding to a partition of the whole state space into lower dimensional subsets. Chapter 3 describes various formats in which the input-output map of a nonlinear system may be represented, and provides a short description of the fundamentals of realization theory. Chapter 4 illustrates how a series of relevant design problems can be solved for a single-input single-output nonlinear system. It explains how a system can be transformed into a linear and controllable one, discusses the role of the nonlinear analogue of the notion of "zero", and describes the problem of asymptotic tracking, model matching and disturbance decoupling. Chapter 5 covers similar subjects for those multivariable nonlinear systems which can be rendered noninteractive by means of static state feedback, and Chapters 6 and 7 are devoted to control via dynamic feedback for a broader class of multivariable nonlinear systems. The book was first published in 1985 as Volume 72 in the series Lecture Notes in Control and Information Sciences. The new edition has been thoroughly revised and furnished with examples and exercises at the end of each chapter.

Descrizione libro Springer, 1994. Hardcover. Condizione: Good. Connecting readers with great books since 1972. Used books may not include companion materials, some shelf wear, may contain highlighting/notes, may not include cdrom or access codes. Customer service is our top priority!. Codice articolo S_308514095

Descrizione libro Springer, 1994. Condizione: Good. . A copy that has been read but remains intact. May contain markings such as bookplates, stamps, limited notes and highlighting, or a few light stains. Codice articolo L17A-02132