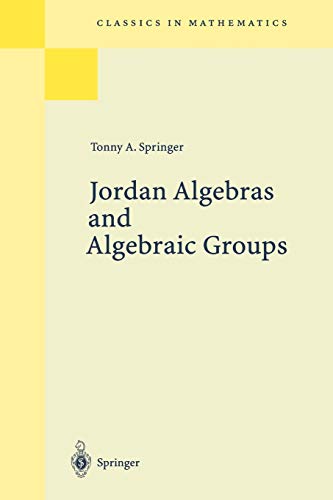 From the reviews: "This book presents an important and novel approach to Jordan algebras. [...] Springer's work will be of service to research workers familiar with linear algebraic groups who find they need to know something about Jordan algebras and will provide Jordan algebraists with new techniques and a new approach to finite-dimensional algebras over fields." American Scientist

Biography of Tonny A. Springer

Born on February 13, 1926 at the Hague, Holland, Tonny A. Springer studied mathematics at the University of Leiden, obtaining his Ph. D. in 1951. He has been at the University of Utrecht since 1955, from 1959-1991 as a full professor, and since 1991 as an emeritus professor.
He has held visiting positions at numerous prestigious institutions all over the globe, including the Institute for Advanced Study (Princeton), the Institut des Hautes Etudes Scientifiques (Bures-sur-Yvette) and the Tata Institute of Fundamental Research (Bombay).
Throughout his career T. A. Springer has been involved in research on various aspects of the theory of linear algebraic groups (conjugacy classes, Galois cohomology, Weyl groups).

Descrizione libro Springer, Berlin, 1997. Kartoniert / Broschiert. Condizione: New. The aim of this book is to give an exposition of a part of the theory of Jordan algebras, using linear algebraic groups. That such groups play a role in Jordan. Codice articolo 4896433