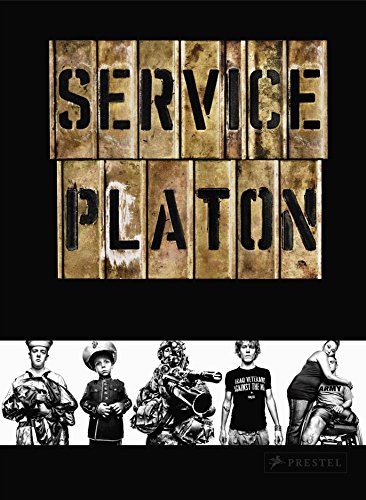 In this powerful, evocative, and moving collection of images—many never-before published—Platon, one of the most acclaimed contemporary photographers, focuses on the effects of war on soldiers and their families. Having created over 25 Time magazine covers and succeeding Richard Avedon as a staff photographer for the New Yorker, Platon has become a household name. His evocative portraits of world leaders comprised a hugely successful previous book, Power. Now Platon has turned his lens to military service, embedding himself outside the battlefield in places where so much occurs that is so rarely mentioned. Given unprecedented access to U.S. military training facilities, Platon photographed soldiers preparing for battle in a staged Iraqi village. Aboard the USS San Antonio, he photographed soldiers the moment before they set sail. Platon’s images capture both joy and grief, strength and vulnerability, support and dissent: a young man's t-shirt that reads "Iraq veteran against the war"; an African American woman stands proudly in full military regalia; a double-amputee stares directly from his wheelchair; and, in arguably the most important image of the 2008 U.S. presidential election, an American Muslim mother cradles the grave of her soldier son. Together, these photographs speak volumes about the lives and families of those who fight: their physical and psychological wounds, their extraordinary valor and often modest backgrounds, and the fierce emotions that surround their service.

"Fans of Platon's work will find much to like in this new book. The reproductions emphasize the inky blacks and crisp contrasts in his black-and-white images. The lettering of the title on the book's cover looks like it was stamped into metal, reminiscent of dog tags. The pages are thick, as if the ink sits heavily on the page. The result is a book that feels both sturdy and raw, a repository for strong emotion."

—PDN: Photo District News
"Platon, a master of minimalist studio portraiture, doesn’t think of himself as a photojournalist. He considers a portrait session an 'event' in which subjects pose as 'a demonstration of their existence' and experience. His 'charming and seductive' nature, Biondi notes in the book’s introduction, helps his subjects open up in front of the camera."

—Slate
"In Service, a new photobook published by Prestel, Platon presents a collection of images which explores the wide-ranging and often surprising effects of war on soldiers, on families, and on society at large. It is a comprehensive study which moves from the surreal to the brutal to the tragic, a dizzying survey of the scale of war . . . In his work, Platon seeks connection above all things, learning peoples’ stories and responding to them in such a way that affords his work its trademark intimacy. He is a humanistic photographer, and Service – with its expansive portrayal of the characters and dramas, small and large, of war – presents violent themes with great sensitivity."

—Feature Shoot
"Before Service, most of Platon’s photographs had been done in a studio. Outside that setting, his images became freer and more emotionally charged. Some of his most compassionate pictures were done on location. His photojournalistic images, which he took with his Leica, were most surprising to me. They were action-packed. They had an immediacy that was almost the opposite of his carefully crafted portraits. Platon’s ability to be fluent in a number of photographic languages ... is one of the reasons his work from this project ... is so compelling. Perhaps the most moving pictures, like the one of Elsheba Khan cradling her son’s gravestone, are those taken at Arlington cemetery."

—Elisabeth Biondi, The New Yorker
"Platon has built his portfolio photographing world leaders such as Vladimir Putin, Mahmoud Ahmadinejad and Aung San Suu Kyi. But leading up to Barack Obama's first election, he wanted to shift away from politics and humanize the big issues instead. In doing so, he would show the flip side to power: service. He embedded himself alongside the men and women who make extraordinary sacrifices every day to serve in the United States military. He focused on training leading up to their deployments, and he documented their returns from war."

Elisabeth Biondi served for fifteen years as the Photo Editor for the New Yorker magazine. Sebastian Junger is a bestselling author, journalist and filmmaker.