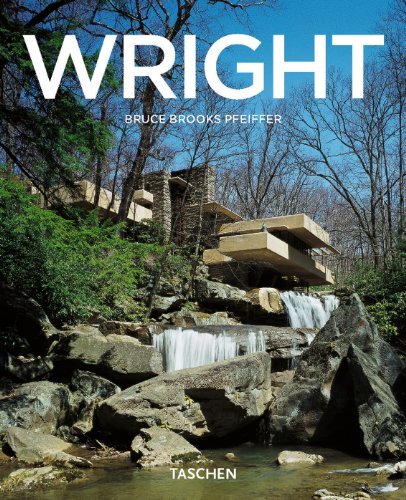 The Wright idea   "The interior space itself is the reality of the building."
- Frank Lloyd Wright

Widely thought to be the greatest American architect, Frank Lloyd Wright (1867-1959) was a true pioneer, both artistically and technically. At a time when reinforced concrete and steel were considered industrial building materials, Wright boldly made use of them to build private homes. His prairie house concept—that of a low, sprawling home based upon a simple L or T figure—was the driving force behind some of his most famous houses and became a model for rural architecture across America. Wright`s designs for office and public buildings were equally groundbreaking and unique. From Fallingwater to New York`s Guggenheim Museum, his works are among the most famous in the history of architecture.   About the Series:
Each book in TASCHEN’s Basic Architecture Series features: