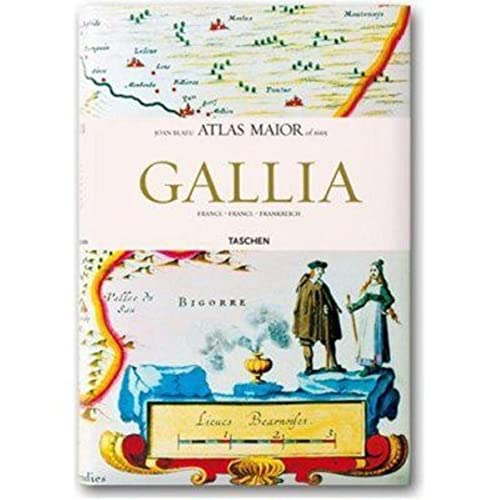 Maps of France from Joan Blaeu's exquisite world atlas of 1665 The finest and most comprehensive baroque atlas was Joan Blaeu's exceptional Atlas Maior, completed in 1665. The original eleven-volume Latin edition, containing 594 maps, put Blaeu ahead of his staunch competitor, mapmaker Joanes Janssonius, whose rivalry inspired Blaeu to produce a grandiose edition of the largest and most complete atlas to date. Covering Arctica, Europe, Africa, Asia, and America, Blaeu's Atlas Maior was a remarkable achievement and remains to this day one of history's finest examples of mapmaking. This reprint, including all 64 maps of France, is made from the National Library of Vienna's colored, gold-heightened copy, thus assuring the best possible detail and quality. Alongside original quotes from Joan Blaeu relating to the individual maps, the new text by Peter van der Krogt explains the historical and cultural associations and introduces the reader into the fascinating world of early modern cartography. The text is in French, English and German. The author: Peter van der Krogt, the leading expert in the field of Dutch atlases, is a collaborator on the Explokart Research Program for the History of Cartography at the University of Utrecht's Faculty of Geosciences. Since 1990 he has been working on Koeman's Atlantes Neerlandici, the carto-bibliography of atlases published in the Netherlands. His second project is the compilation, in co-operation with the Nijmegen University, of an illustrated and annotated catalogue of the Atlas Blaeu-Van der Hem, the most important multi-volume atlas preserved in the Austrian National Library, which was added to Unesco's ?Memory of the World? register in 2004.

This work contains maps of France from Joan Blaeu's exquisite world atlas of 1665. "The Atlas Maior", the cartographical masterpiece of the Baroque period, was brought out between 1662 and 1665 by the Amsterdam publisher Joan Blaeu, one of Holland's leading cartographers. Originally appearing in Latin, the atlas comprised 594 maps in 11 volumes, which depicted the whole of the world as known to early modern Europe. It was the largest and most expensive book published during the 17th century. For more than 100 years, it remained the definitive atlas of the world, and today is among the most sought-after and valuable antiquarian rarities. This reprinted edition in six volumes is based on the hand-colored, gold-heightened copy in the "Osterreichische Nationalbibliothek" in Vienna, thus ensuring the best possible detail and quality. Alongside Joan Blaeu's original commentaries on the individual maps, a new text by Peter van der Krogt explains the historical and cultural associations and introduces the reader to the fascinating world of early modern cartography. This volume includes all 64 maps of France and the text is in French, English, and German.