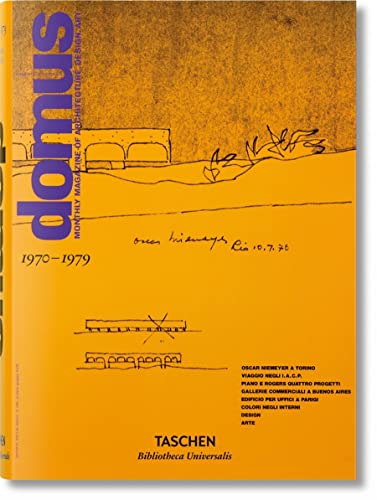 Descrizione libro Taschen, Germany, 2017. Hardback. Condizione: New. Multilingual. Language: Spanish. Brand new Book. Founded in 1928 as a "living diary" by the great Milanese architect and designer Gio Ponti, domus has been hailed as the world's most influential architecture and design journal. With style and rigor, it has reported on the major themes and stylistic movements in industrial, interior, product, and structural design.This fresh reprint of the 1970s domus coverage brings together the most important features from an era marking seismic changes in architecture and design. It was a time when individualism gained momentum as a novel style, and we began to notice the first postmodernist tendencies. Faced with the global energy crisis, architects and designers imbued their methods with a new ecological awareness.For work to be featured in the magazine it had to offer function, spatial clarity, intellectual persuasion, relevant originality, and/or grace. Those groundbreaking projects and practitioners that made the cut include Shiro Kuramata, Verner Panton, Joe Colombo, Richard Meier, the modernist structures by Foster Associates and the Centre Georges Pompidou by Renzo Piano and Richard Rogers.domus distilledSeven volumes spanning 1928 to 1999Over 6,000 pages featuring influential projects by the most important designers and architectsOriginal layouts and all covers, with captions providing navigation and contextNew introductory essays by renowned architects and designersEach edition comes with an appendix featuring texts translated into English, many of which were previously only available in ItalianA comprehensive index in each volume listing both designers' and manufacturers' namesAbout the seriesBibliotheca Universalis - Compact cultural companions celebrating the eclectic TASCHEN universe!. Codice articolo CLD9783836526531