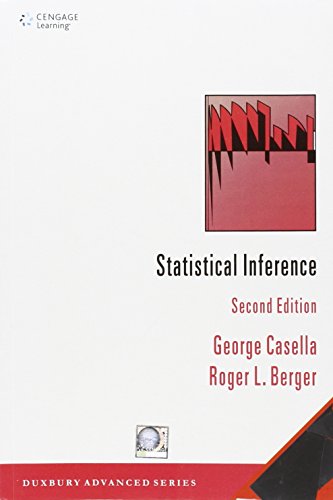 Statistical inference is the method in which a researcher draws conclusions from research data which is subject to random variation. The end goal of statistical inference is to determine what is to be done next with the data set. Statistical Inference is a text that is ideally suited for students in their first year of graduate studies who have a firm footing in their understanding of mathematical concepts. The text builds on the basic theories of probability, using definitions, techniques, and concepts which are statistical and naturally extend from previous concepts. Students can use this text in two ways. They can focus on the practical aspects of the theory, understand basic concepts, and derive statistical procedures which could be used for different situations. Or, students can focus on formally optimizing their research investigations. This second edition of the text has several salient features. It contains new material on random number-generation, bootstrapping, simulation methods, p-values, EM algorithm, and robustness. The authors have also included new topics on Logistic Regression and Robust Regression. The material has been restructured for the purpose of clarity. Updated exercises and key features are also included. The text contains 12 chapters. The topics covered by these chapters are Probability Theory, Multiple Random Variables, Common Families of Distributions, Random Sample Properties, Data Reduction Principles, Interval Estimation, Point Estimation, Hypothesis Testing, Asymptotic Evaluations, Regression and Variance Analysis, and Regression Models. Statistical Inference was published in 2007.

I got it in 5 days. Good packaging. I recommend to buy this book by flipkart. Its cost is too low at flipkart(393INR) as comparison to others(18US Doller). --Arun Dev Kaushik Oct 7, 2013

This is the book I wish I have read when I was really studying. Now, studying is my hobby, not a profession. However, as a performance testing lead, I still need to understand what the word statistics means. Anyone who is actually willing to know what the word statistics means -> this is the book for you. No questions asked. Buy this book. Worth every penny. --Nabarun Mondal Aug 12, 2012

IMHO the best introduction to Probability Theory and Inferential Statistics. Because it doesn't say "Mathematical Statistics" in the title I ignored it for years and iterated between several other good texts. But Casella & Berger is more accurate, more up-to-date, and/or more fun to read. It strikes a better balance among topics and among schools of thought. It is furthermore exceptionally lucid and original, and very carefully edited. The organisation of the text is perfectly coherent, but this doesn't make it easy to skip difficult parts or concepts. The use of the book is also somewhat constrained by the author's effort at using nonstandard and challenging examples and problems (euphemistically called exercises). In practice I have to provide standard exercises to (econometrics) students as additional material. I am slightly uneasy with the unequal treatment of some items, many being emphasized as numbered propositions whereas others are just mentioned in the text. I similarly regret the cursory treatment of asymptotic distributions and asymptotic efficiency (for the purposes of econometrics). I do not like the exposition of Analysis Of Variance, but on the other hand I marvel at the stimulating treatment of linear regression in the last chapter. Quibbles apart, Casella & Berger is a demanding but most rewarding and stimulating introduction to (so-called) mathematical statistics, and in particular it is exceptionally dependable and witty. Beginning students may require some complementary material in the form of standard exercises and worked-out examples. --By Denis de Crombrugghe on January 16, 2001

George Casella was an author and distinguished professor who hailed from New York City. He authored several text books on statistics during his lifetime. Some of these titles are Theory Of Point Estimation, Monte Carlo Statistical Methods, and Variance Components. Casella obtained his Ph.D. in Mathematical Statistics from Purdue University. He served as a faculty member at many esteemed institutions such as Rutgers University, the University of Florida, and Cornell University. Casella received many awards and accolades for his contribution to the field of statistics. Some of these were Fellow of the Institute of Mathematical Statistics and Fellow at the International Statistical Institute. Casella passed away in June 2012 due to multiple myeloma. Roger L. Berger is an author, Director, and Professor at Arizona State University. Other books by him include Solutions Manual For Statistical Inference. Berger completed his Ph.D. at Purdue University in Statistics. He currently teaches and conducts research at North Carolina State University, Arizona State University, and Florida State University. Berger resides in Phoenix, Arizona.

Descrizione libro Condizione: New. Brand new book. This is an international edition textbook with identical content as the US version. We ship all our orders from CA/IL, USA (depending on your address) and NOT from Asia! Buy with confidence from a 5-star US based seller. Choose expedited shipping for superfast delivery with tracking. Codice articolo 9788131503942