Articoli correlati a Analysis I 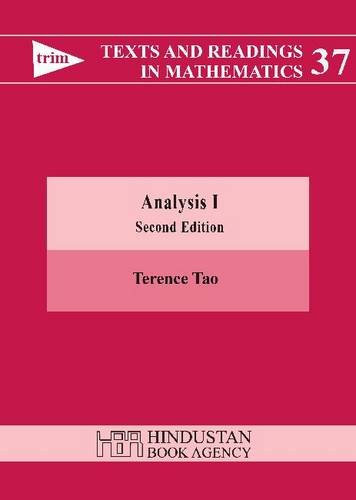 This is part one of a two-volume introduction to real analysis and is intended for honours undergraduates, who have already been exposed to calculus. The emphasis is on rigour and on foundations. The material starts at the very beginning - the construction of number systems and set theory, then goes on to the basics of analysis (limits, series, continuity, differentiation, Riemann integration), through to power series, several variable calculus and Fourier analysis, and finally to the Lebesgue integral. These are almost entirely set in the concrete setting of the real line and Euclidean spaces, although there is some material on abstract metric and topological spaces. There are appendices on mathematical logic and the decimal system. The entire text (omitting some less central topics) can be taught in two quarters of twenty-five to thirty lectures each. The course material is deeply intertwined with the exercises, as it is intended that the student actively learn the material (and practice thinking and writing rigorously) by proving several of the key results in the theory. The second edition has been extensively revised and updated.

1. Analysis I (Texts and Readings in Mathematics, No. 37)

2. Analysis (Texts and Readings in Mathematics)

3. Analysis I (Texts and Readings in Mathematics, No. 37)

4. Analysis I (Texts and Readings in Mathematics, No. 37)