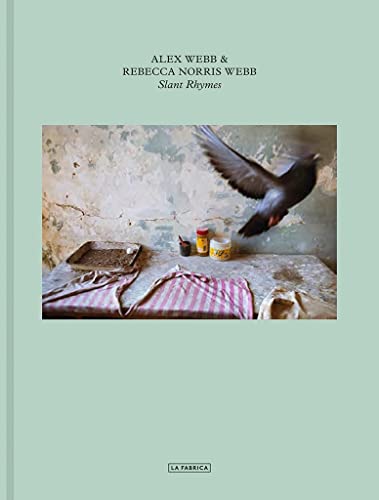 In Slant Rhymes, pairs of photographs by Webb and Norris Webb feed each other like poems in a collection... --Michael Juliani "BOMB "

Every spread contrasts a picture apiece by each of them, and the connections between them are mostly delicate and elusive. --Luc Sante "The New York Times "

By the end of this modest but exquisite book, even viewers unfamiliar with either of the Webbs will have a pretty good idea of their individual strengths and tendencies, as well as of, as it were, their house style. --The New York Times

Rebecca Norris Webb, originally a poet, often interweaves her text and photographs in her six books, most notably with her monograph, My Dakota—an elegy for her brother who died unexpectedly—with a solo exhibition of the work at The Cleveland Museum of Art in 2015. Her work has appeared in The New Yorker, The New York Times Magazine, Le Monde, among other publications, and is in the collections of the Museum of Fine Arts, Boston, Cleveland Museum of Art, and George Eastman Museum, Rochester, NY.

Alex Webb has published 16 books, including a survey book of 30 years of color work, The Suffering of Light. He’s exhibited at museums worldwide including the Whitney Museum of American Art, NY, the High Museum of Art, Atlanta, and the Museum of Fine Arts, Boston. A Magnum Photos member since 1979, his work has appeared in the New York Times Magazine, National Geographic, and other publications. He has received numerous awards including a Guggenheim Fellowship in 2007.