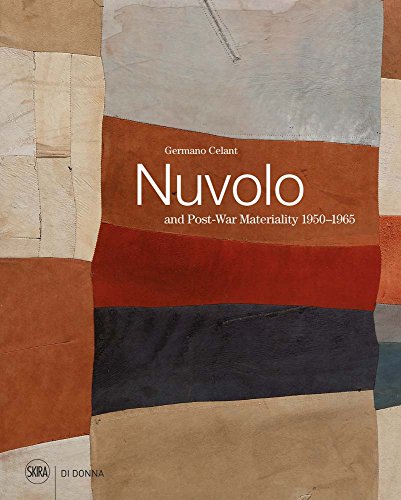 Nuvolo ( né Giorgio Ascani, 1926-2008) was born in Cittŕ di Castello, in the province of Perugia. In 1950 Nuvolo moved to Alberto Burri’s studio in Rome. After World War II, the artistic culture in Italy was characterized by a clash between the tradition of figuration and new modes of abstraction, and by a proliferation of artistic and theoretical movements incentivized by a young generation of artists and by a new international exchange of ideas, stimulated by the presence in Italy of European and American artists such as Jean Fautrier, Antoni Tŕpies, Franz Kline, Conrad Marca-Relli, Robert Rauschenberg, Salvatore Scarpitta, and Cy Twombly. Nuvolo participated in the cultural ferment of this time, engaging with Ettore Colla and the experimental Gruppo Origine , and the group of artists and intellectuals involved with the magazine Arti Visive .

Working within a two-dimensional, rectangular format typically associated with easel painting, Nuvolo introduced new techniques which relied on tension and textural variation, using a range of materials that included commonplace textiles as well as deerskin. Nuvolo also produced an ambitious series of works called “ serotipie ” using a silkscreen technique that enabled him to create intricate drawings which could be repeated ad infinitum. His work was praised by the poet Emilio Villa and promoted by gallerists such as Plinio De Martiis, Topazia Alliata, and Fiamma Vigo.

This publication accompanies the first major exhibition of Nuvolo’s work in the United States, held at Di Donna Galleries in Fall 2017. The book features an insightful essay by Germano Celant as well as a thorough chronology of Nuvolo’s artistic explorations, contextualized within the non-figurative trends of his contemporaries as they unfolded in Italy, Europe, and the United States. Supporting materials include historical documentation and texts by and about the artist. These materials are supported by a large selection of color illustrations featuring works by Nuvolo produced between 1952 and 1965, some of which are published here for the first time.