Articoli correlati a Rembrandt: Genius And His Impact

Rembrandt: Genius And His Impact 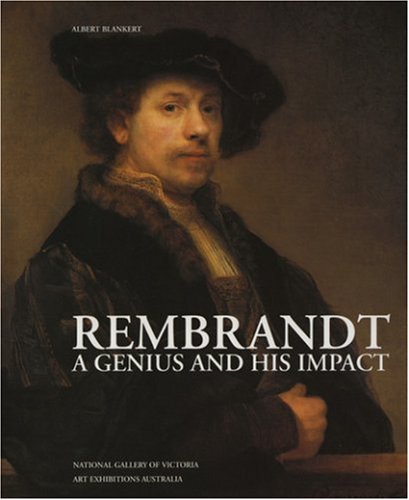 In recent years Rembrandt's oeuvre and influence have been hotly debated. A number of paintings hitherto said to be his, have been reattributed by some scholars to pupils or even to obscure followers, while other works have been radically reinterpreted. This lavishly illustrated book, containing essays by some of the world's leading scholars on seventeenth-century Dutch art, is the first critical review of the present state of Rembrandt studies finds itself in as a result.

A new tradition of painting grew up in the Netherlands in the seventeenth century, in which artists were encouraged to explore the limits of their own capabilities. Rembrandt's portraits and other portraits and other paintings laid bare the inner life of his human and religious subjects in a way equaled by none. Greatly interested in everything he saw, Rembrandt set down the landscapes, and the events that took place in his own surroundings, in works that make him one of the greatest artists the world has ever known.

Rembrandt: A Genius and his Impact is published to accompany a major touring show of paintings, etchings and drawings – which includes important examples by his pupils and followers – shown in Australia in 1997–8.

Albert Blankert is curator of the exhibition, and has published widely on seventeenth-century Dutch art.

In recent decades, a major change has taken place in the appraisal of Rembrandt and his work and impact. Modern scholars have rejected scores of paintings which were previously regarded as masterpieces by the genius Rembrandt and which dazzled the world for centuries. Many of these pictures are now said to be studio pieces or the work of obscure or anonymous pupils, while paintings that were once admired as vivid depictions of daily life have been interpreted as biblical scenes. This book presents the first critical review of recent conclusions about Rembrandt's uvre, many of which have proved unfounded. It also reveals that his work has always inspired legends and myths as well as convoluted interpretations. One of the aims of the book is to extract the kernels of truth from both the old and the new mythologies. Rembrandt's art can only be fully understood when viewed in the context of his impact. For this reason Rembrandt - A Genius and His Impact includes small monographs on the master's most gifted pupils and followers, represented here by the best works they produced. Separate chapters are devoted to drawings and etchings, which form an integral part of Rembrandt's uvre. The book examines the latest research techniques and the most recent insights and discoveries in this field.

1. Rembrandt : A Genius and his Impact

Descrizione libro Reaktion Books, Limited. Hardcover. Condizione: Very Good. A copy that has been read, but remains in excellent condition. Pages are intact and are not marred by notes or highlighting, but may contain a neat previous owner name. The spine remains undamaged. At ThriftBooks, our motto is: Read More, Spend Less. Codice articolo G9040099812I4N00

2. Rembrandt : A Genius and his Impact

Descrizione libro Reaktion Books, Limited. Hardcover. Condizione: Good. A copy that has been read, but remains in clean condition. All pages are intact, and the cover is intact. The spine may show signs of wear. Pages can include limited notes and highlighting, and the copy can include previous owner inscriptions. An ex-library book and may have standard library stamps and/or stickers. At ThriftBooks, our motto is: Read More, Spend Less. Codice articolo G9040099812I3N10

3. Rembrandt: A Genius and His Impact

Descrizione libro Condizione: Good. Most of our items we sell are used and are in good condition. Since our items are mostly used, digital codes are not always valid. We cannot and do not guarantee codes will be unused, redeemable, or included. Our books may contain highlighting or writing. We ship Monday - Friday. Thank you for supporting Goodwill Industries of South Florida. Codice articolo 3NCLXY000EKU

4. Rembrandt: A Genius and His Impact

5. Rembrandt: A Genius and His Impact

Descrizione libro Reaktion Books, 1997. Condizione: Good. A+ Customer service! Satisfaction Guaranteed! Book is in Used-Good condition. Pages and cover are clean and intact. Used items may not include supplementary materials such as CDs or access codes. May show signs of minor shelf wear and contain limited notes and highlighting. Codice articolo 9040099812-2-4

6. Rembrandt: A Genius and His Impact

7. REMBRANDT A Genius and His Impact

8. Rembrandt: A Genius and His Impact

9. Rembrandt: A Genius and His Impact

10. Rembrandt: A Genius and His Impact