Articoli correlati a A Soul for Europe: An Essay Collection: 2

A Soul for Europe: An Essay Collection: 2

A Soul for Europe: An Essay Collection: 2 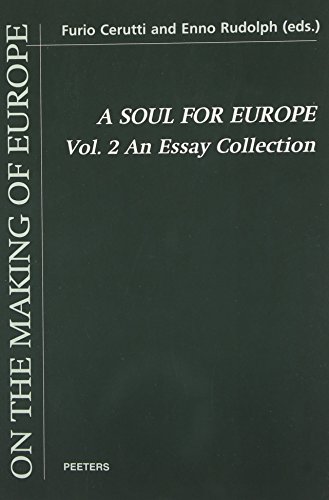 After ten and more years of continuous movement toward integration the European Union and its citizens are confronted with the problem of whether or not to take decisive steps towards the establishment of a full-fledged common polity. This implies a Europe-wide debate (including the future member states) and deliberation process about the values, principles an basic policies that the citizens can perceive as common to everybody. Whatever its relationship to the diversity of existing national and local identities, Europian identity is about the Union's institutions becoming rooted in the "soul" of the citizens, thus receiving democratic legitimacy and support. In these two volumes authors who have a political and intellectual interest in the European process dicuss its unprecedented features as a peaceful and voluntary union of peoples, its understandable delays and less acceptable shortcomings. The first volume is a reader, written in non-academic terms: it discusses the essential components of an European political identity as far as problems like democracy, citizenship, social justice, war and peace, freedom, borders are concerned, also looking at the history of this identity. The second volume is a collection of scientific essays that provide in-depth analysis of fundamental aspects of European cultural identity such as religion, art and economic culture, myth and civil society. The two volumes can be read independently of each other, but it can be expected that readers who become acquainted with one will feel stimulated to reach for the other.

1. A Soul for Europe. On the Cultural and Political Identity of the Europeans. An Essay Collection. Volume 2 (On the Making of Europe)