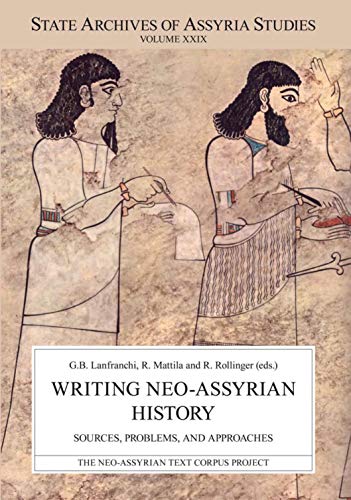 Descrizione libro The Neo-Assyrian Text Corpus Project, Finland, 2019. Paperback. Condizione: New. Language: English. Brand new Book. The purpose of the papers read at the meeting held in Helsinki, Finland, in 2014, and of the relevant proceedings forming this volume, was to discuss and update the historical methodologies adopted in the past and present study of the Neo-Assyrian Empire. The title of the meeting and of this proceedings volume, "Writing Neo-Assyrian History", clearly indicates the aim of the organizers and of the participants: to submit to both specialized scholars and educated readers a comprehensive outline of the various studies about Neo-Assyrian history, and to thoroughly comment on all possible problems so as to offer a basic "manual" for further innovative studies. All this was conceived in the framework of the scientific mission of the International Research Project which produces the series State Archives of Assyria, aimed at publishing all available Neo-Assyrian texts according to a modern and commonly shared editing system.The importance of the meeting and of this volume is relevant not only because of the innovative character of most articles, but also because of the prospective methodological spin-off in other historical sectors, from Greek and Roman history to medieval, modern or even Oriental (e.g., Chinese, Japanese, Indian) history. The importance of the spin-off in other sectors of the history of Ancient Mesopotamia, and in general of the Ancient Near East, is self-evident.The volume offers a distinctive contribution to knowledge in history and historiography in general, but also in demonstrating and applying a tight connection between history, philology, archaeology and history of art, extending to the fields of ideology, politics, sociology, religion, economy and law.The sources discussed in the various articles extend from cuneiform texts of various kinds to monumental relics and archaeological findings of all kinds, studied according to the most updated Assyriological methodologies and the most advanced historical approaches. Codice articolo AAR9789521095023