Articoli correlati a Elegy for French-horn and orchestra. Arranged by M....

Elegy for French-horn and orchestra. Arranged by M. Buyanovsky and V. Buyanovsky. Score 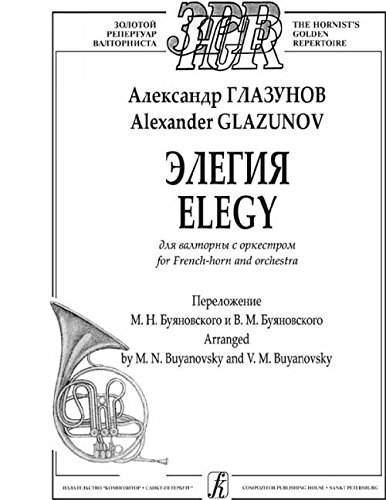 1. Elegy for French-horn and orchestra. Arranged by M. Buyanovsky and V. Buyanovsky. Score

Descrizione libro Compozitor (SPb.), 2004. Condizione: new. Pages: 40 Language: Russian, English. Alexander Konstantinovich Glazunov (1865 1936) originates from the family of the well-known Petersburgian publisher and bookseller. The Glazunovs company was the eldest one in Russia. Konstantin Ilyich, the composer s father, was interested in music since his green years, when he played violin and piano. Elena Pavlovna, the composer s mother, studied piano passionately at professor F. O. Leshetitsky and M. A. Balakirev, while lessons on music theory were conducted by N. A. Rimsky-Korsakov. Thus the Glazunovs house was filled with sounds. As for the young Alexander Glazunov, he was brought up at home till 1877. The atmosphere surrounding him from the early childhood made for the primary musical knowledges to be inculcated in him. Being nine years old little Sasha started his piano practice. It was the pianist N. N. Yelenkovsky to become Glazunov s first preceptor. Young Glazunov made him the first listener of his new-born compositions. Of course, Glazunov s rich nature had a thirst for profound theoretical base in harmony. M. A. Balakirev and N. A. Rimsky-Korsakov fortuned to be his educators on theory and harmony. Their lessons were held once a week, however, the young composer s talent was working against time. Little Sasha Glazunov devoted his spare time to music and especially to F. List s creation. It happened on March, 1882, when Glazunov s First Symphony premi?re took place in the Nobility Assembly Hall conducted by M. Balakirev. The Symphony was a success, while its author stopped the show amongst the musical society. The distinguished Maecenas Mitrofan Petrovich Belyayev met Glazunov right during the Glazunov s rehearsals. That wealthy timber merchant s passion was music, thus he accepted Glazunov as the symbol of the youth and flourishment condescending to the Russian music. Belyayev directed all his generosity to young Glazunov. The end of May, 1884 was marked by the Weimar F. Liszt Festival, where Belyayev decided to accompany Glazunov and to listen to Wagner s operas. Liszt and Glazunov managed to talk together. Having left Weimar the travellers went to Marocco and Spain. Coming to Petersburg, they felt on high spirits. It was caused by vivid impressions got during their journey. Spanish and Arabian music features inundated Glazunov s creation that time. Two years passed since the Weimar Liszt Festival, when the great master died. Glazunov mourned him, having dedicated the new Symphony ? 2 to the mostly respected predecessor. In 1886 Glazunov shared his feelings with Stasov: "Liszt s death made me cease working at the Second Symphony". The grievous date cast new mood to Glazunov, having dedicated his "Elegy" to Liszt s memory. The "Elegy" was arranged for French horn and piano by professor M. N. Buyanovsky, while the orchestral transcription of the accompaniment was fulfilled by his son V. M. Buyanovsky. 9790660037089. Codice articolo 15-156384