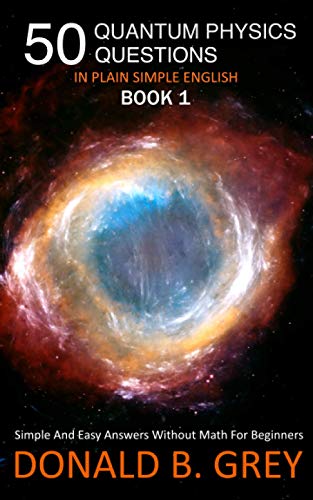 Descrizione libro Independently Published, United States, 2020. Paperback. Condizione: New. Language: English. Brand new Book. ? Are you fascinated by quantum physics and want to unlock its mysteries and complexities, but are somehow intimidated by the formulas and mathematics? ?Are you wishing you could share the insights and discoveries of brilliant theoretical physicists and scientists?Are you looking for a book that can reveal quantum physics in a simple, uncomplicated and clear way that you can immediately understand?If so, this book is for you. It's in an easy and fun-to-read format of 50 of the most common questions about the ever-expanding quantum world of subatomic particles and the forces that govern them.You will quickly learn about: The origin of the universe, the cosmic microwave background, and the three laws of thermodynamics.Black holes, neutron stars, dark matter, and dark energy.Fermions, including protons, neutrons, and electrons, and how they form atoms.Quarks that affect the electrical charges of atoms, as well as alpha decay, beta decay, and their roles in radiation and particle transformations.Radioactive half-life, nuclear fission in atoms, and the nuclear fusion that powers the stars.Bosons and the four forces that control the universe: strong, weak, electromagnetic, and gravity.The uncertainty principle and the wave/particle law of complementarity, supersymmetry, superposition, and the exclusion principle.Superstring theory, with its 11 dimensions of ultimately fundamental vibrating strings.The Standard Model and Grand Unified Theory, and Einstein's theories of special and general relativity.Entanglement of distant particles and its role in quantum computing.How electron microscopes and PET scans work.The meaning of quantum electrodynamics and quantum chromodynamics.If these and many other aspects of quantum physics are what you are hoping to learn without having to deal with complexities, this is the one book that you can count on to bring you up to speed, quickly and easily, on all that is going on in quantum physics. Codice articolo APC9798686429925