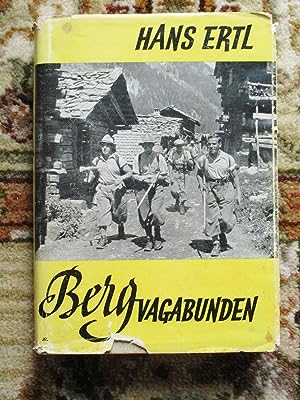 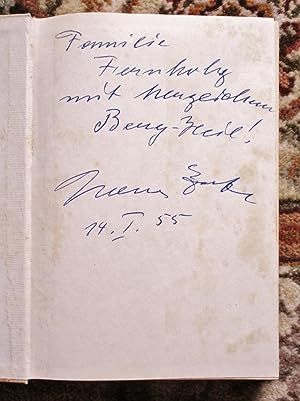 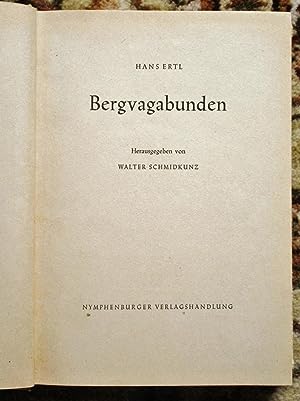 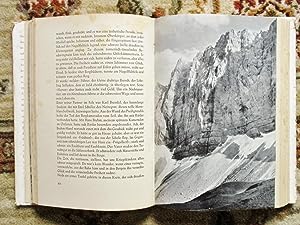 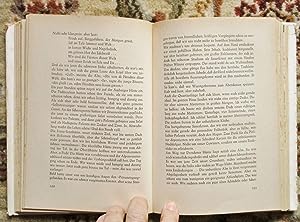 BERGVAGABUNDEN (Mountain Wanderers), by HANS ERTL. SIGNED, INSCRIBED and DATED by HANS ERTL on the front free endpaper. The inscription by Ertl is in German and is 4 lines long. I cannot read his handwriting. Ertl's SIGNATURE is beneath his inscription, and beneath the inscription Ertl has added the date 14.1.55 (January 14, 1955). Hardcover book in dustjacket, 6x8 inches, 263 pages plus some unnumbered photographic plates here and there throughout. Published by Nymphenburger, Munich, Germany, 1952. Fourth edition. Condition: FAIR book, the covers have light foxing and a bit of bubbling to the cloth covered boards, there is foxing to the page edges (edges of the closed book), foxing to the endpapers, soiling and some staining to the rear endpapers, foxing to the pages that face the photographic plates, toning to all the pages (as normal), still a solid, tightly bound copy with text that is clear and fully legible and photographic plates that are sharp and bright; in an only FAIR dustjacket that has chips and wear along its edges, corners and spine ends, a few 1 inch tears, scraping at the folds, and some soiling; nonetheless the dj is still doing its job. A rare SIGNATURE and INSCRIPTION by HANS ERTL just before he left Germany for Bolivia, where he spent the rest of his days. About HANS ERTL, Mountaineer, Nazi Cinematographer, Bolivian Refugee, Filmmaker (from Wikipedia): ******Hans Ertl (b. 1908 in Munich, Germany, d. 2000 in Chiquitania, Bolivia) was a German, and later Bolivian, mountaineer and cinematographer. In the 1930s he was the first man to ascend a number of notable mountain peaks. He was a cameraman and filmmaker during the Nazi era. He worked with Leni Riefenstahl on several of her Nazi propaganda films as well as on her Olympia film. During World War II he was among the preferred cameramen accompanying General Rommel which earned him a reputation as "Rommel's Photographer". In the mid 1950s he left Germany and resettled in Bolivia where he made two feature length documentaries of his Bolivian mountaineering expeditions. He embarked on a third filming expedition, but ceased after his tractor crashed through a wooden bridge with two thirds of the exposed footage on board. Frustrated he then decided to become a farmer and retired to a piece of semi-jungle land in Eastern Bolivia. Ertl was the father of the Bolivian Revolutionary Guerrilla Fighter MONIKA ERTL, he was also an acquaintance of KLAUS BARBIE and, reportedly a lover of LENI RIEFENSTAHL. He rarely returned to Germany where he felt cheated out of an important film award, but days before his death he asked his daughter in Bavaria to send him a bag of German soil. Ertl died in 2000 and he was buried on his farm which is now a museum.******. Codice inventario libreria 000850

Antiquarian and Collectible Books and Ephemera


We guarantee the condition of every book as it's described
on the Abebooks web sites. If you're dissatisfied with your
purchase (Incorrect Book/Not as Described/Damaged) or if the
order hasn't arrived, you're eligible for a refund within 30
days of the estimated delivery date. If you've changed your
mind about a book that you've ordered, please use the Ask
bookseller a question link to contact us and we'll respond
within 2 business days.