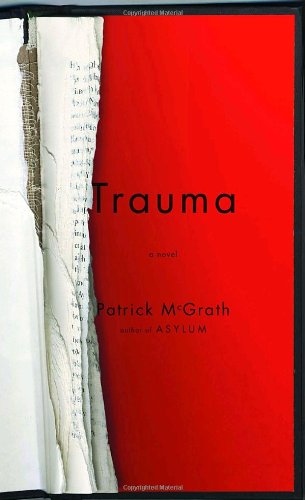 Growing up in a severly dysfunctional family, Charlie Weir builds a career as a psychiatrist in New York City, working with victims of trauma including veterans returning from Vietnam, but the suicide of a patient, the breakup of his marriage, the growing turmoil of the city around him, and a volatile other woman lead Charlie to question everything, even his own sanity. 40,000 first printing.

"The inversion of roles, the blurring of the boundaries between the rational and the irrational, the violence, the twisted sexual passions, the slipperiness of memory: these are familiar themes in McGrath's fiction. Here they are recombined in powerful and imaginative ways. Trauma is a gripping psychological thriller. McGrath's prose is taut and lean; his way with characters is deft; and his explorations of the dark side of human nature are disturbing. And at the novel's centre, the descent of its narrator from a false sense of superiority into a pit of madness and despair is handled with great skill." –Andrew Scull, The Times Literary Supplement

“Full of sensitive, well-observed touches [and] elegant when it needs to be...In Trauma, McGrath makes us see that our own minds are the most haunted of houses.” –Stephanie Zacharek, Los Angeles Times

“That hypnotic, reasonable and wistful voice of Dr. Charles Weir, psychiatrist, had me utterly in thrall...Beautifully crafted and paced, Trauma can be viewed as either a superb psychological thriller or as a masterly evocation of modern alienation and despair...[It] is, in short, a terrific literary entertainment, one that will keep you on edge, worried and guessing.” –Michael Dirda, The Washington Post

“Tortuous, often gripping...The novel is aptly titled, since trauma can be said to be the origin and the end of its insidiously uncoiling developments.” —Sven Birkerts, The New York Times Book Review

“Trauma is Patrick McGrath at his dark-hearted best. Read one page–one sentence–and you’ll be hooked by this elegant psychological thriller set in the gritty, pre-gentrification Manhattan of the 1970s...Trauma reminds you of how satisfying it is to be unable to put a book down–and then, when it’s over, to be sorry and relieved to enter your own comparatively unhaunted life.” —Francine Prose, O, The Oprah Magazine

“A haunting story of a man in the grip of a painful and beautifully articulated spiritual malaise.” —Publishers Weekly

Patrick McGrath is the author of six previous novels, including Asylum and Spider, and two collections of stories. He lives in New York.
From the Trade Paperback edition.