Articoli correlati a Brush with Passion: The Art and Life of Dave Stevens 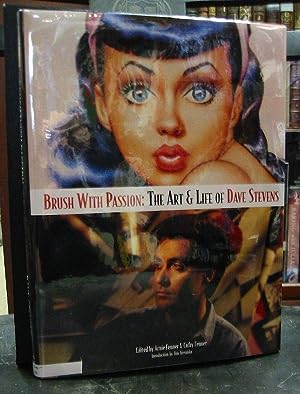 Brush with Passion: The Art and Life of Dave Stevens

Titolo: Brush with Passion: The Art and Life of Dave...

Brush with Passion charts the career of Dave Stevens, one of the most beloved and influential of all comic illustrators. He discusses his beginnings as a comic artist, the struggle to bring The Rocketeer to the big screen, his work as a storyboard artist for Raiders of the Lost Ark and Michael Jackson’s ?Thriller” video, and other career highlights. Equally renowned as a pin-up artist, Stevens also recounts his friendship with reclusive model Bettie Page. Along with a wealth of iconic paintings and previously unpublished artwork, the book features commentary by comic book greats Todd Schorr, Richard Hescox, Michael William Kaluta, and William Stout.

"Dave Stevens was the last artist of an innocent era when showing less and teasing more was the way to eroticism. He was much more than that, of course. His artwork burst with the heroic innocence and determination of an America that existed fully only on the printed page and the movie screen. Even when drawing some bondage or spanking scene, his art was human, lively, caring."
— Heidi MacDonald

"It's been more than 30 years during which I have stood in hang-jawed wonder and delight at Dave Stevens' singular beautification of the universe."
— Harlan Ellison

"Dave Stevens' brush is an alembic, distilling the essence of the past with the edge of the future, never allowing the authenticity of his nostalgia to succumb to imitation or pastiche. In other words: Hubba-hubba! We likes!"
— The Wachowski Brothers

"[Dave Stevens] is my best friend in the whole world, bar none!"
— Bettie Page

"Dave is not only a stunning craftsman but is also a master of design and form. He has an intuitive ability to capture sensuality with a few delicate lines, to make the complex and elusive look simple, yet impossible to imitate (believe me, I have tried). It is this ability to see a little deeper, this sensitive and unique vision that makes Dave Stevens a true artist among artists."
— Brom

Lost Horizon Bookstore is a family run business, established in downtown Santa Barbara in 1983. We have recently moved to the upper village of Montecito , CA. We have a small, but select stock, ranging in price from a few dollars to several thousand. We have an excellent selection of books in the fields of Art, Architecture, Design and Decorative Arts. We are also strong in Western and California History, Archaeology and Ethnographic Art. Hours: Mon-Sat, 11-6.


Visa or Mastercard, money orders and checks accepted in U.S. funds. International sales will be insured at
full value; additional charges and any customs are the responsibility of the recipient. All books bought
directly from us, via Abebooks are returnable for refund, within 30 days, in original condition. No returns
on third-party (drop-ship) purchases. Please notify us ASAP via phone or e-mail.