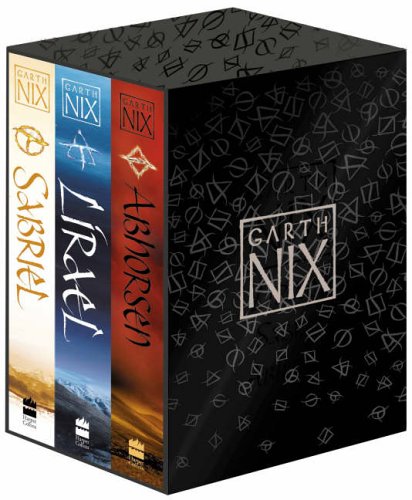 Venture into the magical landscape of the Old Kingdom for three spellbinding tales of discovery, destiny and danger. This stunning boxed set contains Garth Nix’s bestselling Sabriel, Lirael and Abhorsen.

SABRIEL
A young girl discovers her destiny is to take on the duties of the Abhorsen and protect the living from Free Magic and the clutches of the Dead.

LIRAEL
As an ancient evil casts its shadow and threatens to break the very boundary between Life and Death, Lirael is forced from her position as Second Assistant Librarian to confront the power that is rising.

ABHORSEN
The Destroyer is awake and summoning forces more powerful than any before. Can Lirael – newly appointed Abhorsen-in-Waiting – and her small team hope to find the clue that will lead to the downfall of this mighty force? And if so, can they defeat it and save the Old Kingdom from this ultimate evil?

“[Garth Nix is] the coolest read in the playground.” Amanda Craig

"Sabriel is a winner, a fantasy that reads like realism. Here is a world with the same solidity and four-dimensional authority as our own, created with invention, clarity and intellience." Philip Pullman

“I think Garth Nix has created a really remarkable and persuasive wold, and done it in the grand style of high fantasy and heroic romance, with some wonderful twists and turns. His Sabriel is a heroine truly worthy of that role.” Lloyd Alexander

“By turns rousing, charming and slyly funny, Sabriel is an engaging tale that slays sexual stereotypes along with its monsters.” San Francisco Chronicle

“The action charges along at a gallop. A page turner for sure.” ALA Booklist

“Readers who like their fantasy intense in action, magisterial in scope and apocalyptic in consequences will revel in every word.” Kirkus starred review

“What makes LIRAEL a delight is the magic that Nix brings to his story and to his characters. It is filled with twists and turns, playful inventiveness and dark magic, and is sure to satisfy his many readers.” Locus

“At once an allegory regarding war and peace and a testament to friendship, this thought-provoking fantasy also resolves the true identities of the popular Dog and Mogget characters-and suggests that Nix may still have more tricks up his sleeve.” Publishers Weekly

Garth Nix was born in 1963 and grew up in Canberra, Australia. After taking his degree in professional writing from the University of Canberra, he worked in a bookshop and then moved to Sydney. There he sank lower into the morass of the publishing industry, steadily devolving from sales rep through publicist until in 1991 he became a senior editor with a major multinational publisher. After a period travelling in Eastern Europe, the Middle East and Asia in 1993, he left publishing to work as a marketing communications consultant . In 1999 he was lured back to the publishing world to become a part-time literary agent. He now lives in Sydney, a five-minute walk from Coogee Beach, with his wife, Anna, and lots of books.