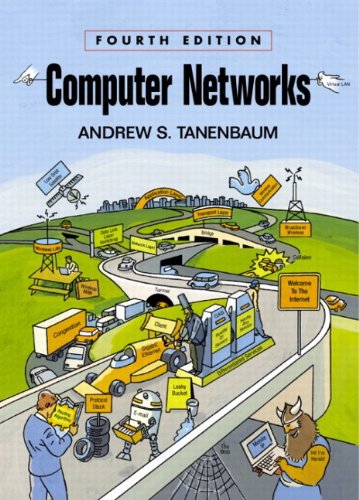 ANDREW S. TANENBAUM is Professor of Computer Science at Vrije Universiteit, Amsterdam, The Netherlands, and Scientific Director of ASCI, a Dutch graduate school established by leading universities throughout the Netherlands. He is also a Fellow of the IEEE and a Fellow of the ACM. Other books Tanenbaum has authored or co-authored include Structured Computer Organization, Fourth Edition; Operating Systems: Design and Implementation, Second Edition; Modern Operating Systems, Second Edition; and Distributed Systems: Principles and Paradigms (all from Prentice Hall).

Computer Networks, Fourth Edition is the ideal introduction to today's networks?and tomorrow's. This classic best seller has been thoroughly updated to reflect the newest and most important networking technologies with a special emphasis on wireless networking, including 802.11, Bluetooth, broadband wireless, ad hoc networks, i-mode, and WAP. But fixed networks have not been ignored either with coverage of ADSL, gigabit Ethernet, peer-to-peer networks, NAT, and MPLS. And there is lots of new material on applications, including over 60 pages on the Web, plus Internet radio, voice over IP, and video on demand.Finally, the coverage of network security has been revised and expanded to fill an entire chapter.

Author, educator, and researcher Andrew S. Tanenbaum, winner of the ACM Karl V. Karlstrom Outstanding Educator Award, carefully explains how networks work on the inside, from underlying hardware at the physical layer up through the top-level application layer. Tanenbaum covers all this and more:

The book gives detailed descriptions of the principles associated with each layer and presents many examples drawn from the Internet and wireless networks.