Articoli correlati a On the Road: (Penguin Classics Deluxe Edition) 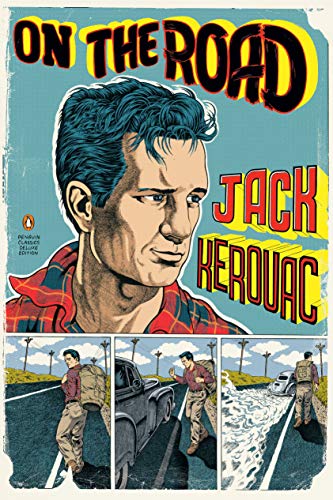 A counterculture classic records the escapades of members of the beat generation as they seek pleasure and meaning while traveling coast to coast. Reprint.

"An authentic work of art . . . the most beautifully executed, the clearest and the most important utterance yet made by the generation Kerouac himself named years ago as 'beat,' and whose principal avatar he is."
--Gilbert Millstein, The New York Times

"On the Road has the kind of drive that blasts through to a large public. . . . What makes the novel really important, what gives it that drive is a genuine new, engaging and exciting prose style. . . . What keeps the book going is the power and beauty of the writing."
--Kenneth Rexroth, San Francisco Chronicle

"One of the finest novels of recent years. . . a highly euphoric and intensely readable story about a group of wandering young hedonists who cross the country in endless search of kicks."
--Leonard Feather, Downbeat

Jack Kerouac(1922-1969), the central figure of the Beat Generation, was born in Lowell, Massachusetts, in 1922 and died in St. Petersburg, Florida, in 1969. Among his many novels are On the Road, The Dharma Bums, Big Sur, and Visions of Cody.

Descrizione libro Paperback. Condizione: New. Language: English. Brand new Book. The legendary novel of freedom and the search for authenticity that defined a generation, now in a striking new Pengiun Classics Deluxe Edition Inspired by Jack Kerouac's adventures with Neal Cassady, On the Road tells the story of two friends whose cross-country road trips are a quest for meaning and true experience. Written with a mixture of sad-eyed naivete and wild ambition and imbued with Kerouac's love of America, his compassion for humanity, and his sense of language as jazz, On the Road is the quintessential American vision of freedom and hope, a book that changed American literature and changed anyone who has ever picked it up. Codice articolo ABZ9780140283297

Descrizione libro Paperback. Condizione: new. Paperback. In its time Jack Kerouac&#039;s masterpiece was the bible of the Beat Generation, the essential prose accompaniment to Allen Ginsberg&#039;s Howl. While it stunned the public and literary establishment when it was published in 1957, it is now recognized as an American classic. With On the Road, Kerouac discovered his voice and his true subject&mdash;the search for a place as an outsider in America. On the Road swings to the rhythms of fifties underground America, jazz, sex, generosity, chill dawns, and drugs, with Sal Paradise and his hero Dean Moriarty, traveler and mystic, the living epitome of Beat. &quot;Life is great, and few can put the zest and wonder and sadness and humor of it on paper more interestingly than Kerouac.&quot; &mdash;Luther Nichols, San Francisco Examiner &quot;Just as, more than any other novel of the Twenties, The Sun Also Rises came to be regarded as the testament of the Lost Generation, so it seems certain that On the Road will come to be known as that of the Beat Generation.&quot; &mdash;Gilbert Millstein, The New York Times atDidn&#039;tTypeOnTP For TWITTERATURE of On the Road by Jack Kerouac, please see On the Road by Jack Kerouac. From &quot;Twitterature: The World&#039;s Greatest Books in Twenty Tweets or Less&quot; The indisputable bible of the Beat Generation, &quot;On the Road&quot; (1957) fictionalizes Kerouac&#039;s years traveling the North American continent with his friend, Neal Cassidy. Shipping may be from multiple locations in the US or from the UK, depending on stock availability. Codice articolo 9780140283297