Articoli correlati a Bridge to Terabithia 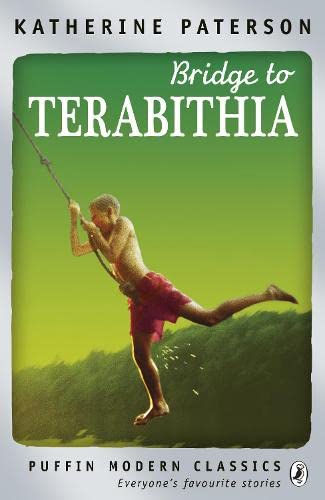 Jess Aarons wants to be the fastest boy in the class. He's been practising all summer and he's sure he's going to win. But when a girl named Leslie Burke moves into the neighbouring farm his life changes forever. Not only does Leslie not look or act like any of the girls in school, she also turns out to be the fastest runner in the year. After getting over the humiliation of being beaten by a girl, Jess begins to think Leslie might be okay - she's clever and funny and not a bit soppy. It is Leslie who invents Terabithia, the secret country on an island across the creek. Here Jess could forget his large, quarrelsome family, his father who thought it was ummanly to love drawing, and his little sister May Belle, who was always tagging after him. Here he could be strong and unafraid. The only way to reach Terabithia is by rope-swing where Jess and Leslie become King and Queen, defeating giants, sharing stories and dreams, and plotting against their enemies. They are invincible - until tragedy strikes. It is more dreadful than anything Jess had ever dreamed of, but as he struggles to cope with his grief and anger, he finds that his family value him more than he'd thought and that, still King, he could even save Terabithia for the future.

Katherine Paterson was born in China in 1932 - she was the middle of five children. Her parents were missionaries and during her childhood the family travelled extensively.

After graduating she was a teacher in Virginia and later she travelled to Japan where she lived for four years.

She now lives in Vermont, USA and loves to teach, read and cook.

Katherine Paterson is twice winner of the Newbery Medal: in 1978 for BRIDGE TO TERABITHIA and in 1981 for JACOB HAVE I LOVED.