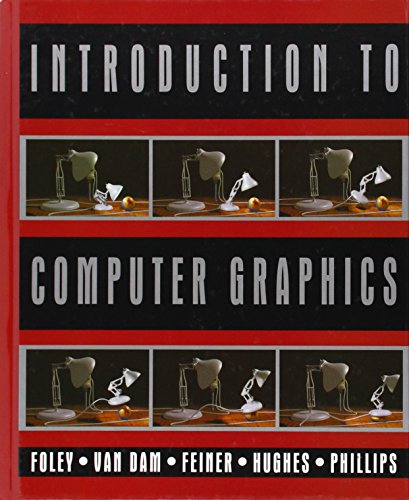 This adaptation of the definitive book in the field (Computer Graphics, Second Edition by Foley, et al.,) provides a more concise, less expensive introduction to computer graphics. While retaining the currency and accuracy of the larger work, coverage has been trimmed to the essential topics. Explanations of key concepts have been expanded and further illustrated, assuming less background on the part of the reader. This brief version uses C as the programming language for all worked examples. An Introduction to Computer Graphics does not replace the highly regarded Second Edition of Foley, et al., but simply offers professionals the option of a briefer, less expensive version.

James D. Foley (Ph.D., University of Michigan) is the founding director of the interdisciplinary Graphics, Visualization & Usability Center at Georgia Institute of Technology, and Professor of Computer Science and of Electrical Engineering. Coauthor with Andries van Dam of Fundamentals of Interactive Computer Graphics, Foley is a member of ACM, ACM SIGGRAPH, ACM SIGCHI, the Human Factors Society, IEEE, and the IEEE Computer Society. He recently served as Editor-in-Chief ofACM Transactions on Graphics, and is on the editorial boards of Computers and Graphics,User Modeling and User-Adapted Interaction, and Presence. His research interests include model-based user interface development tools, user interface software, information visualization, multimedia, and human factors of the user interface. Foley is a Fellow of the IEEE, and a member of Phi Beta Kappa, Tau Beta Phi, Eta Kappa Nu, and Sigma Xi. At Georgia Tech, he has received College of Computing graduate student awards as Most Likely to Make Students Want to Grow Up to Be Professors, Most Inspirational Faculty Member, the campus Interdisciplinary Activities Award, and the Sigma Xi Sustained Research Award. In 1997, Foley received theSIGGRAPH Steven A. Coons Award.

Andries van Dam (Ph.D., University of Pennsylvania) was the first chairman of the Computer Science Department at Brown University. Currently Thomas J. Watson, Jr. University Professor of Technology and Education and Professor of Computer Science at Brown, he is also Director of the NSF/ARPA Science and Technology Center for Computer Graphics and Scientific Visualization. His research interests include computer graphics, hypermedia systems, and workstations. He is past Chairman of the Computing Research Association, Chief Scientist at Electronic Book Technologies, Chairman of Object Power's Technical Advisory Board, and a member of Microsoft's Technical Advisory Board. A Fellow of both the IEEE Computer Society and of ACM, he is also cofounder of ACM SIGGRAPH. Coauthor of the widely used book Fundamentals of Interactive Computer Graphics with James Foley, and of Object-Oriented Programming in Pascal: A Graphical Approach, with D. Brookshire Conner and David Niguidula, he has, in addition, published over eighty papers. In 1990 van Dam received the NCGA Academic Award, in 1991, theSIGGRAPH Steven A. Coons Award, and in 1993 the ACM Karl V. Karlstrom Outstanding Educator Award.

Steven K. Feiner (Ph.D., Brown University) is Associate Professor of Computer Science at Columbia University, where he directs the Computer Graphics and User Interfaces Lab. His current research focuses on 3D user interfaces, virtual worlds, augmented reality, knowledge-based design of graphics and multimedia, animation, visualization, and hypermedia. Dr. Feiner is on the editorial boards ofACM Transactions on Graphics, IEEE Transactions on Visualizations and Computer Graphics, andElectronic Publishing, and is on the executive board of the IEEE Technical Committee on Computer Graphics. He is a member of ACM SIGGRAPH and the IEEE Computer Society. In 1991 he received an ONR Young Investigator Award. Dr. Feiner's work has been published in over fifty papers and presented in numerous talks, tutorials, and panels.

This new introductory text to computer graphics is an adaptation of Computer Graphics: Principles and Practice, Second Edition, which remains the most comprehensive and authoritative work in the field. While retaining the currency and accuracy of the larger book, this abbreviated version focuses on topics essential for all beginners in computer graphics and provides expanded explanations for readers with little or no technical background. Worked examples have been added to illustrate important concepts and techniques, and program code has been written in the C language to enhance the book's usefulness. In addition, the book contains an extensive illustration program, with more than 50 full-color images.

Topic coverage includes basic graphics programming, hardware, and applications. Important algorithms are included to facilitate implementation of both 2D and 3D graphics. A separate chapter covers SPHIGS--a simplified dialect of the PHIGS 3D standard--and coincides with the availability of an updated version of the software. Chapter 9 and presents a concise overview of interaction issues and techniques. Advanced material from the larger book has been condensed, and the mathematics needed for it has been explained carefully .

The result is an accessible introduction to computer graphics, crafted to provide a solid foundation for further work in this exciting field.