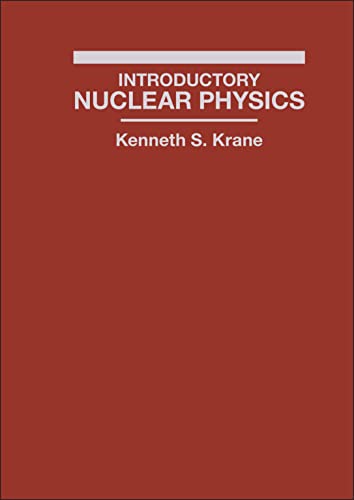 This comprehensive text provides an introduction to basic nuclear physics, including nuclear decays and reactions and nuclear structure, while covering the essential areas of basic research and practical applications. Its emphasis on phenomonology and the results of real experiments distinguish this from all other texts available. Discussions of theory are reinforced with examples which illustrate and apply the theoretical formulism, thus aiding students in their reading and analysis of current literature. The text is designed to provide a core of material for students with minimal background in mathematics or quantum theory and offers more sophisticated material in separate sections.

Kenneth S. Krane is Professor of Physics at Oregon State University, where he has served on the faculty since 1974, including 14 years as Department Chair. He received the Ph.D. in nuclear physics from Purdue University in 1970 and held postdoctoral research positions at the Los Alamos National Laboratory and the Lawrence Berkeley National Laboratory before joining the faculty at Oregon State. His research involves nuclear structure and nuclear spectroscopy, and has led to more than 100 papers in refereed journals and 30 years of funding in experimental nuclear physics from NSF and DOE. He was selected to be a Fellow of the American Physical Society by the Division of Nuclear Physics. He is also involved in education research and curriculum development and has held numerous NSF grants supporting those activities. He has served as chair of the APS Committee on Education, the APS Forum on Education, and the AIP Advisory Committee on Physics Education. From 1995-2006 he was the director of the Workshop for New Faculty in Physics and Astronomy, a national mentoring program for college and university faculty. In 2004 he was awarded the Millikan Medal of the American Association of Physics Teachers in recognition of his contributions to physics teaching.

Descrizione libro Condizione: New. Brand New Paperback International Edition.We Ship to PO BOX Address also. EXPEDITED shipping option also available for faster delivery.This item may ship from the US or other locations in India depending on your location and availability. Codice articolo AUN-169969

Descrizione libro Softcover. Condizione: New. Brand new book. This is an international edition textbook with identical content as the US version and is usually paperback bound instead of hardcover. We ship all our orders from CA/IL, USA (depending on your address) and NOT from Asia! Buy with confidence from a 5-star US based seller. Choose expedited shipping for superfast delivery with tracking. Codice articolo 1314|9780471805533

Descrizione libro Hardcover. Condizione: New. New. US Hardcover. Select Expedited to get your book in 3 to 4 days within USA, CANADA, UK. All packages can be tracked. Excellent service. Thank you for looking. Codice articolo 000189