Articoli correlati a The Soulful Science: What Economists Really Do and...

Coyle, Diane The Soulful Science: What Economists Really Do and Why It Matters

The Soulful Science: What Economists Really Do and Why It Matters 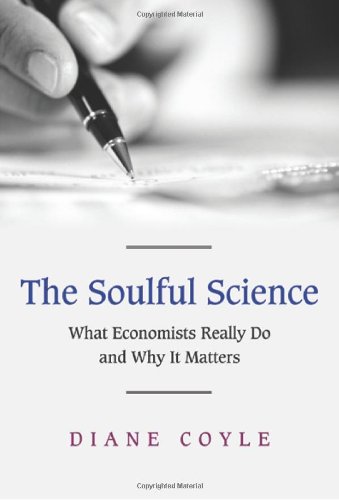 To many, Thomas Carlyle's put-down of economics as "the dismal science" is as fitting now as it was 150 years ago. But Diane Coyle argues that economics today is more soulful than dismal, a more practical and human science than ever before. Building on the popularity of books such as Freakonomics that have applied economic thinking to the paradoxes of everyday life, The Soulful Science describes the remarkable creative renaissance in how economics is addressing the most fundamental questions--and how it is starting to help solve problems such as poverty and global warming. A lively and entertaining tour of the most exciting new economic thinking about big-picture problems, The Soulful Science uncovers the hidden humanization of economics over the past two decades.

Coyle shows how better data, increased computing power, and techniques such as game theory have transformed economic theory and practice in recent years, enabling economists to make huge strides in understanding real human behavior. Using insights from psychology, evolution, and complexity, economists are revolutionizing efforts to solve the world's most serious problems by giving policymakers a new and vastly more accurate picture of human society than ever before. They are also building our capacity to understand how what we do today shapes what the world will look like tomorrow. And the consequences of these developments for human life, for governments, and for businesses are only now starting to be realized--in areas such as resource auctions, pollution-credit trading, and monetary policy.

The Soulful Science tells us how economics got its soul back--and how it just might help save the planet's.

One of Choice's Outstanding Academic Titles for 2007
"The book is well written, copiously referenced and generous in its acknowledgement of the relationships between economics and other social sciences. . . . [T]he general reader . . . will find much to think about."--David Throsby, Times Literary Supplement

"Coyle's style is very accessible, and this book is an excellent survey of the frontiers of economics for the general reader. Students of economics at all levels will benefit, as the work's academic credentials are strong, with more than 300 references to leading books and articles. Overall, The Soulful Science can be recommended highly."--Paul Ormerod, Times Higher Education Supplement

"The best thing about [this book] is a deft mapping of the developments in economic thought. Coyle describes brilliantly the intellectual geography of her subject."--Frances Cairncross, Nature

"Most of The Soulful Science is devoted to a grand whirlwind tour of modern economics, with fascinating vignettes of individual economists. It's a trip worth taking, because what economists do has changed considerably in the past two decades, and the textbooks haven't kept up. Coyle, who is both a journalist and a Harvard-trained economist, is ideally suited to the role of tour guide: She understands economists as only a fellow economist can, and she can write, as most economists cannot."--David Colander, American Scientist

"This is an astonishing book: beautifully written. . . . [I]t is also beautifully edited; it is the first book I have read in a long time that is equally at home on either side of the Atlantic--which is not an easy trick to pull off."--Andrew Hilton, Financial World

"Fluently written with the balance of a good novel, the result is a tour de force."--Donald Anderson, Business Economist

"Coyle shows how contemporary economists are bringing theory out of the classroom as they adopt a more pragmatic, humanistic approach to such problems as poverty and pollution."--Edward Nawotka, Bloomberg News

"The simple aim of The Soulful Science is to describe what economists do, how the field has changed in the past 10 years or so, and why you should care. It succeeds admirably."--Financial Times

"Coyle cares about these issues not only as an economist (once the economics editor at this newspaper), nor because she sits on the Competition Commission, applying theory to curb monopolistic tendencies, but also because she feels economists, and their work, are often misunderstood."--Salil Tripathi, The Independent

Diane Coyle is a writer and Harvard economics Ph.D. whose books include Sex, Drugs and Economics: An Unconventional Introduction to Economics and The Weightless World: Strategies for Managing the Digital Economy. A member of the BBC Trust and the UK Competition Commission, and a visiting professor at the University of Manchester, she also runs an economic consulting firm, Enlightenment Economics. A former economics editor of the Independent newspaper, she lives in London.

1. The Soulful Science: What Economists Really Do and Why It Matters Coyle, Diane