Articoli correlati a Fundamentals of Astrodynamics and Applications

Vallado, David A. Fundamentals of Astrodynamics and Applications

Fundamentals of Astrodynamics and Applications 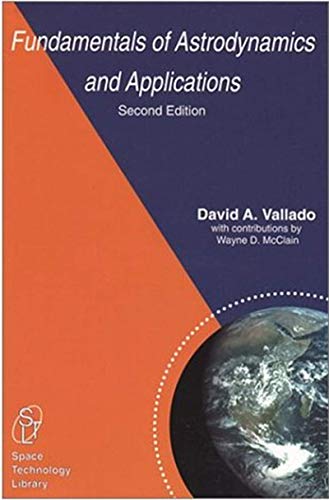 Fundamentals of Astrodynamics and Applications is rapidly becoming the standard astrodynamics reference for those involved in the business of spaceflight. What sets this book apart is that nearly all of the theoretical mathematics is followed by discussions of practical applications implemented in tested software routines. For example, the book includes a compendium of algorithms that allow students and professionals to determine orbits with high precision using a PC. Without a doubt, when an astrodynamics problem arises in the future, it will become standard practice for engineers to keep this volume close at hand and `look it up in Vallado'.
While the first edition was an exceptionally useful and popular book throughout the community, there are a number of reasons why the second edition will be even more so. There are many reworked examples and derivations. Newly introduced topics include ground illumination calculations, Moon rise and set, and a listing of relevant Internet sites. There is an improved and expanded discussion of coordinate systems, orbit determination, and differential correction. Perhaps most important is that all of the software routines described in the book are now available for free in FORTRAN, PASCAL, and C. This makes the second edition an even more valuable text and superb reference.

Descrizione libro Springer, 2001. Condizione: Good. A+ Customer service! Satisfaction Guaranteed! Book is in Used-Good condition. Pages and cover are clean and intact. Used items may not include supplementary materials such as CDs or access codes. May show signs of minor shelf wear and contain limited notes and highlighting. Codice articolo 0792369033-2-4