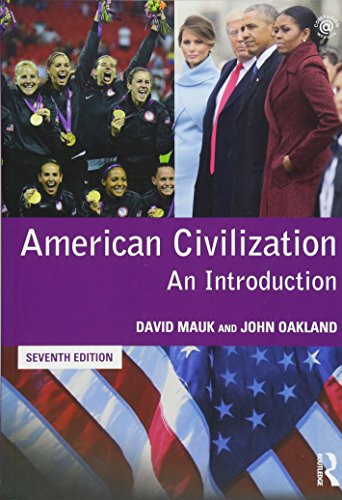 The hugely successful American Civilization provides students of American Studies with the perfect background and introductory information on contemporary American life, examining the central dimensions of American society from geography and the environment, government and politics, to religion, education, sports, media and the arts. Fully updated throughout, the seventh edition:

Containing questions and terms for discussion, bibliographical references and websites at the end of each chapter and a new selection of color illustrations and case studies, this textbook is an essential resource for all students of American civilization, culture and society.

"Instead of offering a confusing chronology like many traditional textbooks, American Civilization takes a thematic approach that puts core concepts into an accessible context for contemporary audiences, dissecting American history, politics and culture for an international audience."

David Mauk is Professor Emeritus of North American Area Studies at the University of Oslo, Norway and is the author of The Colony that Rose from the Sea: Norwegian Maritime Migration and Community in Brooklyn (1997) and many articles on American politics, immigration and ethnicity, including chapters in E Pluribus Unum or E Pluribus Plura? Unity and Diversity in American Culture (2011), Norwegian American Women (2011), and Norwegian-American Essays (2014, 2015).