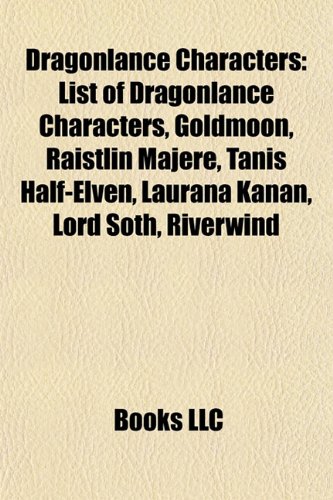 Please note that the content of this book primarily consists of articles available from Wikipedia or other free sources online. Pages: 40. Chapters: List of Dragonlance characters, Raistlin Majere, Goldmoon, Tanis Half-Elven, Laurana Kanan, Lord Soth, Riverwind, Sturm Brightblade, Tasslehoff Burrfoot, Caramon Majere, Kitiara uth Matar, Flint Fireforge, Dalamar, Palin Majere, Heroes of the Lance, Steel Brightblade, Tika Waylan. Excerpt: This is a list of Dragonlance characters and their early life in the series. Alhana Starbreeze is first introduced in Dragons of Winter Night as the daughter of Speaker of the Stars Lorac Caladon. During the War of the Lance, Alhana leads her people in exile to Ergoth. She later brings the Heroes of the Lance to Silvanesti where they encounter the nightmare and fight the dragon Cyan Bloodbane. Alhana fell in love with Sturm Brightblade and even gave him a starjewel, but their love could never be, and he died soon afterwards. She later marries Porthios Kanan and works with him to eradicate the dream from Silvanesti, although theirs is a chilly and mainly political marriage. Eventually they grow to love each other. During the Chaos War, she gives birth to a son, Silvanoshei. Years later during the War of Souls, Silvanoshei would fall in love with Mina and follows her to Sanction. There, he kills Takhisis and Mina kills him in turn. Alhana names her nephew Gilthas leader of the elven people and departs. In the Elven Exiles Trilogy, it is revealed that Alhana has gone searching for Porthios, and she eventually finds him in Bianost. She joins his fight to free Qualinesti, comes with him to Khur to save the elves there, and then returns with him to Qualinesti to continue the struggle to free Qualinesti. Alleran Waylan, also known as Wonderful Waylan is the biological father of Tika Waylan in the fictional Dragonlance world. He had Tika with one of the barmaids at the Inn of the Last Home. Alleran was a minor mage who often entertained c...